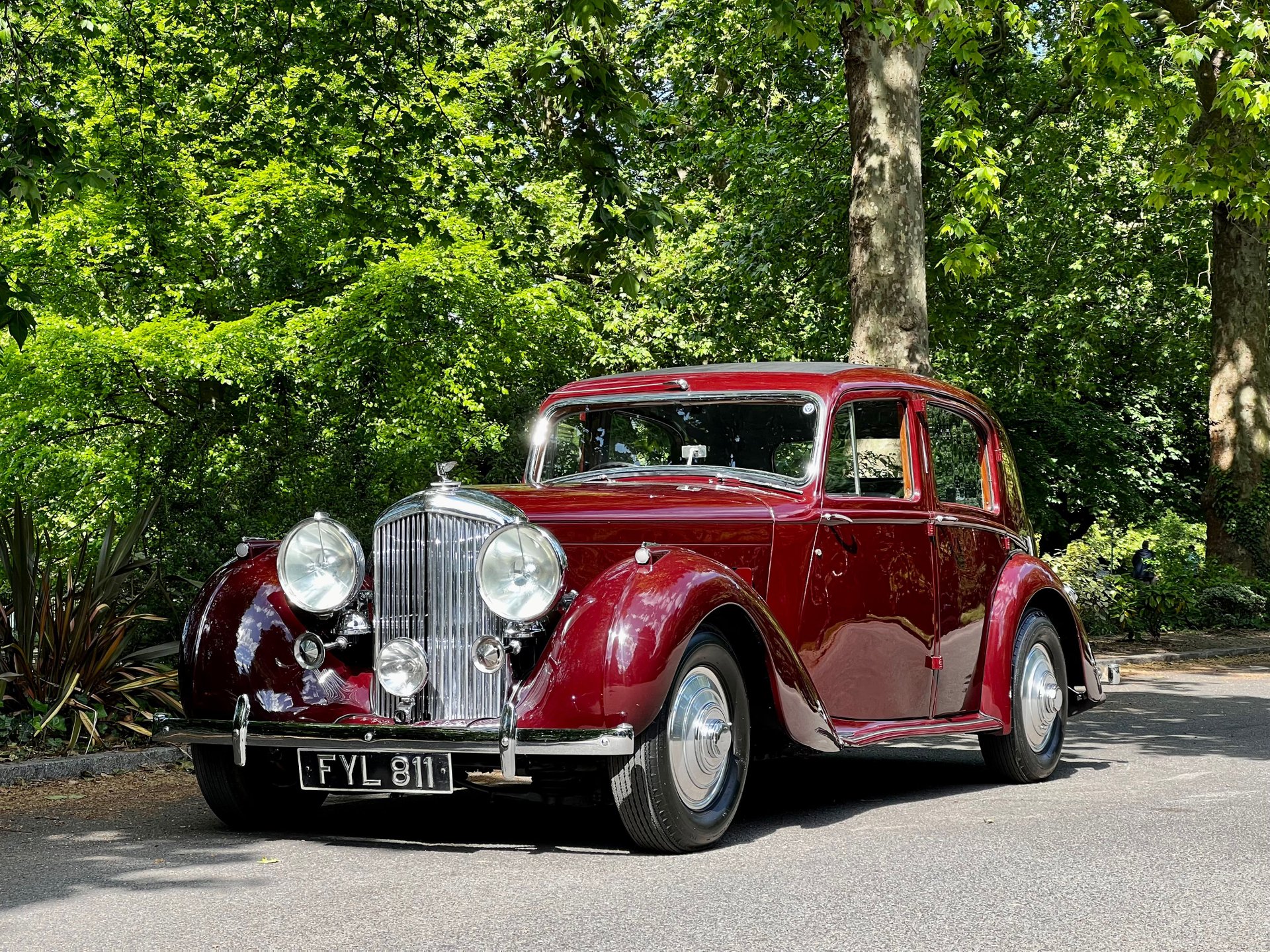 of 46
View All Photos

Chassis Number: B34AW Engine Number: K5BF Registration Number: FYL 811
Highlights:
• The rarest of all Bentleys, 1 of 7 Mark Vs in existence
• B34AW is the last surviving Bentley chassis to leave the Derby works
• First registered to renowned dealer Jack Barclay (as 'JB 1') and evaluated by him over
a two-year period before being returned to the factory.
• Fitted with Park Ward coachwork and later restored by Andrew Wood (now of P&A
Wood) whilst he was an apprentice at the Rolls-Royce Hythe Road service
department.
• Correct type engine from Woolf Barnato's sister Bentley chassis B-16-AW
• “[the Mark V] a car, now only emerging from the experimental stage, which those
fortunate mortals who have tried it proclaim to be the finest all-rounder ever built” Motor Sport Magazine February 1941

The Mark V is the rarest of all Bentleys. Rolls-Royce planned to produce thirty-five experimental Bentley MK V chassis starting from B-2-AW through to B-70-AW using even numbers only. Seventeen were actually completed into running chassis due to the outbreak of the Second World War. Ten of these are recorded as being destroyed during the war and seven genuine MK V's remain today. One of those is owned by Bentley Motors and included within their seven car “Lineage Collection” to indicate its importance to the development of Bentley cars.
The 4 1⁄4 Litre Derby Bentley – advertised as the 'Silent Sports Car' – was refined, reliable and loved by owners, among them land speed record holder Sir Malcolm Campbell. But, by the late 1930s it had become obvious that its chassis design was becoming dated. Competitors with newer designs were crowding in and sales were in decline. The Bentley Mark V was the company's answer – but its time was short-lived, as the outbreak of WWII halted all car production until 1946. Following the war the first car to emerge from the Crewe works was the highly successful Bentley Mark VI. This was effectively the fully-developed form of the Mark V, including all the components and engineering revisions originally planned for its predecessor.
The Mark V was powered by an OHV crossflow 4257cc six-cylinder engine, similar in concept to that of the 4 1⁄4 Litre Bentley, but substantially revised. A new and robust cruciform chassis featured deep side members, making it stiffer to the benefit of both refinement and handling. Brakes were servo driven and the four-speed overdrive gearbox now featured synchromesh on 2nd, 3rd and 4th gears. But the biggest change was the adoption of independent front suspension with coil springs and wishbones.
The first Mark V prototypes were warmly received by the board of directors and a series of Mark V Bentleys were prepared for long-distance testing in continental Europe during 1938. The company also commissioned an aerodynamic version called the Corniche; it was designed by Georges Paulin, creator of the influential Embiricos Bentley, and bodied by Carosserie Vanvooren in France. Unfortunately this 'missing link' between pre-war Embiricos and post- war Continental was badly damaged in a crash on 7th August 1939 in France; the chassis was returned to Derby while the entire body was removed and repaired at a local coachworks. The repaired body was later waiting on the dockside at Dieppe when it was caught in a bombing raid and completely destroyed. Bentley Motors have recently recreated a Bentley Corniche. Another one-off prototype was an eight-cylinder version of the Mark V, nicknamed the 'Scalded Cat' due to its electrifying performance.
According to automotive historian Ken Lea, the Bentley Mark V was 'probably the most thoroughly developed and tested car the company had seen.' It was signed off for production in time for its planned debut at the 1939 Olympia Motor Show, where it would have been displayed with bodywork by a number of independent coachbuilders. Following the outbreak of war in September 1939 both production and the motor show were cancelled.
The Mark V was the first Bentley to employ independent front suspension, a feature which made a significant difference to its handling. The chosen wishbone / coil spring system was attached to a stiffer, stronger version of the outgoing 4.25 litre chassis that incorporated notably deeper side rails. The advanced engine was closer in concept to the torquey Wraith unit and improvements made included higher compression pistons; modified camshafts; reworked inlet and exhaust manifolds; and twin SU carburettors. Other refinements included synchromesh on second gear as well as the upper ratios and a divided propeller shaft.
B-34-AW is the last Derby Bentley made, being the last chassis to leave the Derby works and, as will be seen, subsequently became of considerable historical importance. Indeed, bearing in mind the post-war rationalisation of the Rolls-Royce / Bentley ranges, it is reasonable to regard this as the last of the company's truly handmade cars, the lineage of which dated back to 1908.
Chassis B-34-AW was intended to debut at the 1939/1940 New York World Fair but, owing to the risks involved in shipping at that time, was instead offered to Jack Barclay in June 1940 as a Park Ward Sports Saloon, and duly registered 'JB 1'. It is important to understand that all the Mark Vs were effectively experimental cars, and the deal was that Barclay would evaluate B-34-AW over a two year period and provide Rolls-Royce with regular updates, which he did.
With the original agreement satisfied, the Bentley was then registered as 'FYL 811' and sold to Mr P G Hingley of Worcestershire - images in the book 'A Pride of Bentleys' by John Adams and Ray Roberts show the car was liveried in Yellow over Black around this period. Following six further keepers, it was acquired by Andrew Wood, of the renowned marque specialists P & A Wood. At the time of his purchase, Wood was an apprentice at Rolls-Royce's Hythe Road Works. Andrew and his brother Paul restored the car under the watchful eye of the Hythe Road foreman, installing the latest factory improvements to ensure the car was to the optimum specification.
This, their first Bentley restoration, was celebrated when the car was invited to, and displayed at, the opening of P & A Wood's new Rolls-Royce showroom.
Following a much more recent restoration of its' lightweight body which consists of a steel frame with alloy wings, boot lid, bonnet and doors, FYL 811 is now resplendent in its original colour of Corniche Maroon and is complemented by Pale Grey hide upholstery and matching Grey carpets bound in leather.
A very rare high performance pre-war “super saloon” capable of long distance touring or rallying.

A really rare example of the Bentley Corniche FHC - one of the very last produced being under-pin...

* Price revision * As one of only 23 RHD 4 door S2 Continentals by James Young the rarity of thes...